This is without a doubt the most anticipated knife of 2012 for me. I’ve been eyeballing this knife for months and I’ve kept my eyes open for a good deal, but it seemed all these wonderful blue knives were priced at a ridiculous price, or simply sold before I got the chance to buy one.That was until 4 days ago when I saw one for sale and was able to buy it at the retail price. To say I was excited, is an understatement.

The fit and finish of the blade was excellent and the blade was perfectly centered and locked up perfectly. All in all, I was really excited to put the knife to use and test out the new M390 blade steel.

Out came the Edge Pro and the stones. I selected the following progression:

The reason I chose this was because I heard this steel was so abrasive resistant, most stones wouldn’t even cut it and if they did, they did it so slow it would drive you insane. I opted to set the bevel with diamond plates first so I could take out alle the uneven grind marks and reset the bevel completely before starting with the waterstones.

When I put the 140 Atoma on the blade and started sharpening, it SKIPPED. It didn’t plough through the steel like I’m used to, but needed some pressure to get it to bite through the steel. I was already impressed as I’ve never encountered something so abrasive resistant. The same applies for the 320 grit DMT plate. At this point I wasn’t really sure this stuff was even steel! It seemed unnatural to me and surely no human could have made this. It seemed as if my efforts would be futile, but persisted and got the bevel set after much hard work.

Here’s the edge of the 320 DMT (Burr wasn’t removed for this picture). 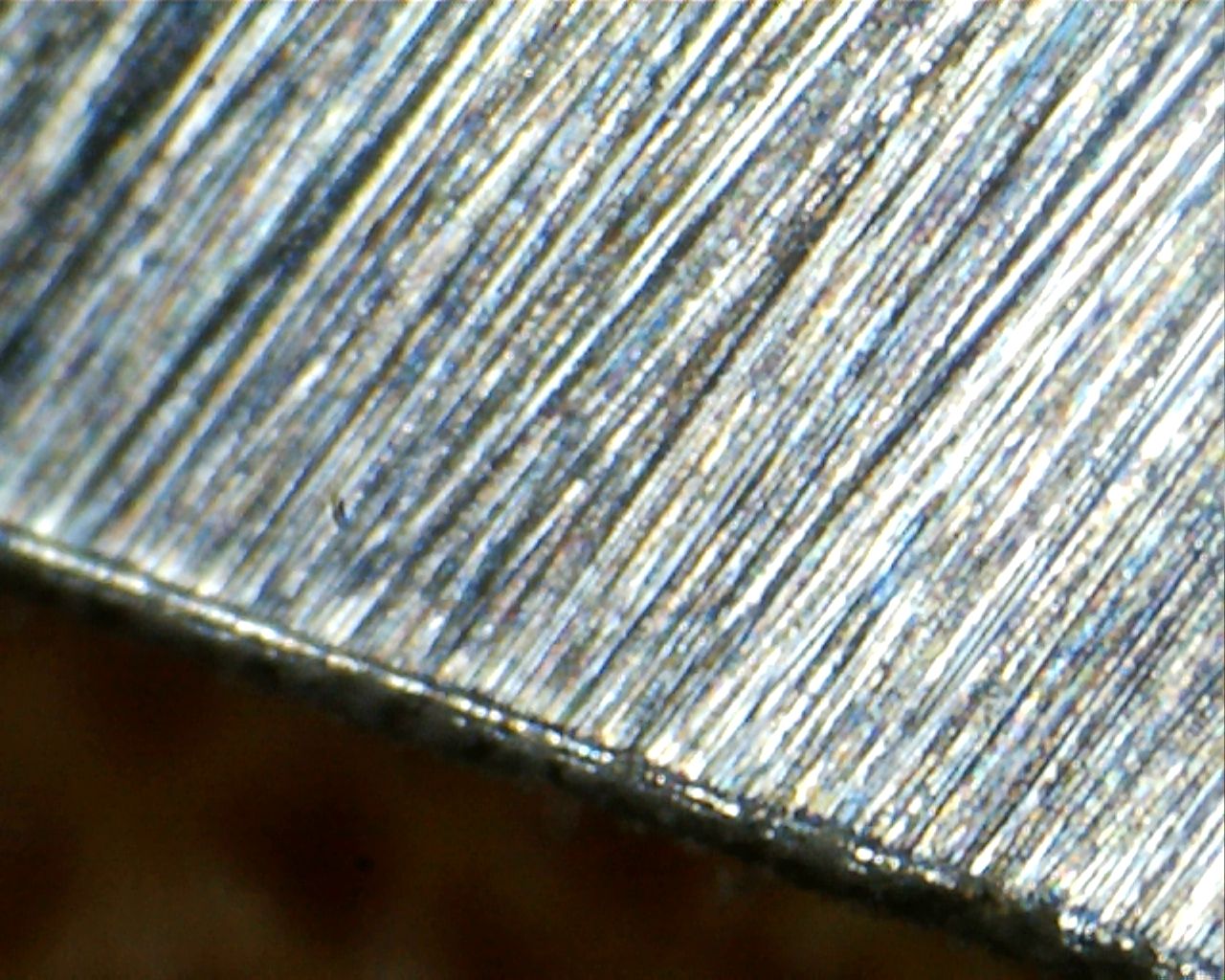 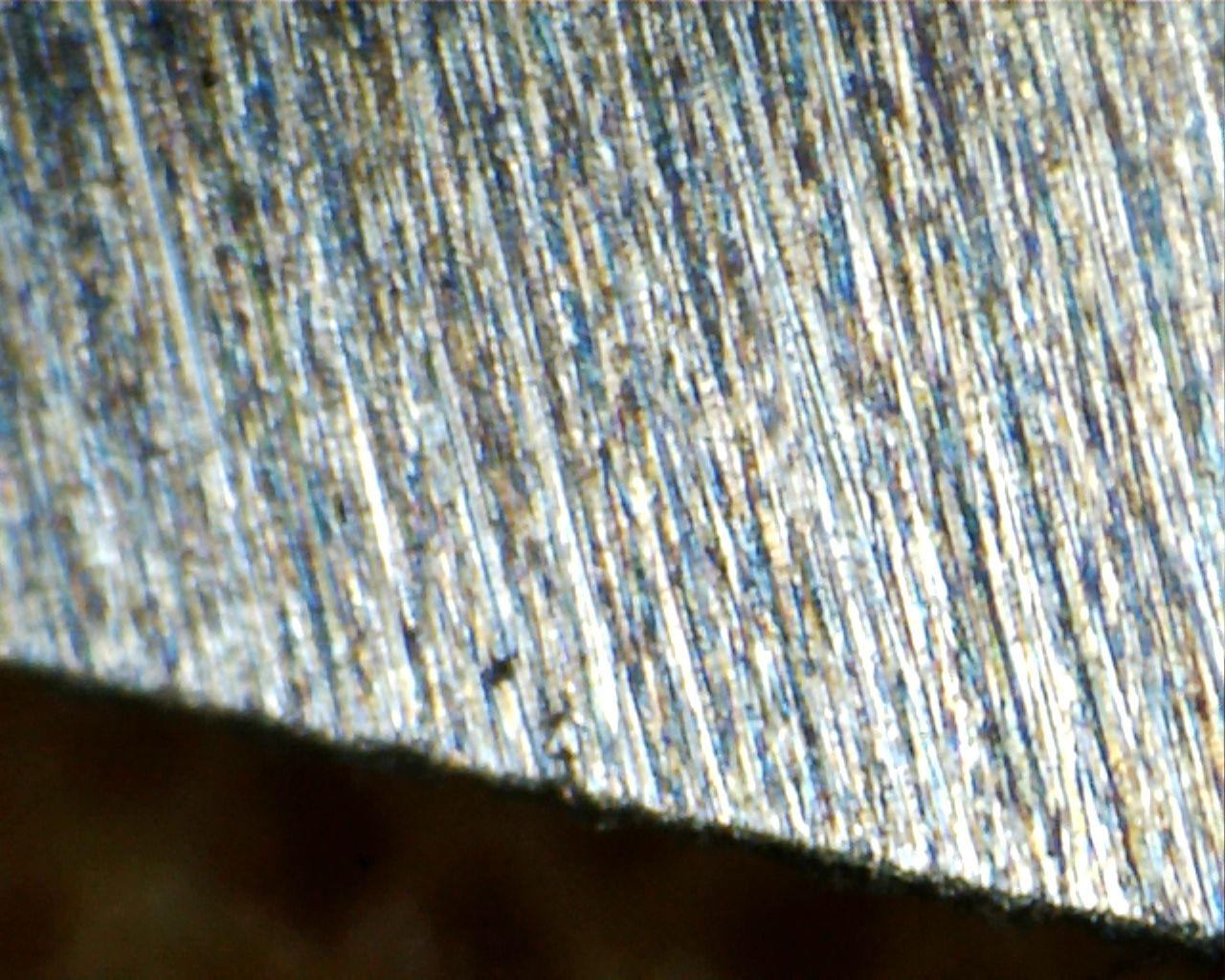 Now this is where the dilemma started. Icould go with 2 stones I saw suitable for the task. Both the 1k Chosera and Shapton pro were ready to tackle this beast of a folder and I had to make a decision. The Shapton would cut faster as it’s a bit coarser, but it would glaze and I would have to clean off the stone more often. The 1k Chosera is roughly the same as the 1500 Pro stone, so it would be slower at cutting the steel, but since it wouldn’t glaze, I chose this stone. i lapped it with a 140 grit Atoma plate and didn’t lap it any finer since the coarser stone finish would improve the cutting action. The result was almost 20 minutes on the 1k Chosera before I felt it I was done with it. the Hulk didn’t disappoint, it’s just the M390 that challenged it to the last minute. The result was a close to mirror finish from a 1k stone. That’s the power of the Hulk.

At this point I was so focused on the knife and the sharpening, i no longer went back to the microscope to take pictures. I felt it would take me out of the zone and would destroy my sharpening pleasure. It’s been a LONG time since a knife challenged me this hard to make a perfect edge.

The 4k Glass stone was my weapon of choice now. I knew the GS was fast and would cut very well, but the jump from the 1k Chosera might have been too much for it. because I ignored the 2k Shapton Pro it had a hard time removing all the 1k scratches. Next time I will include the 2k Shapton to make sure the scratches are gone. (Pretty much every other steel would be fine with a 1k Chosera to 4k GS jump). When I was done I could see the ridges of my fingerprints in the reflection of the edge.

I wasn’t going to make the same mistake twice and opted for a 8k GS instead of the Naniwa Snow White. While the Snow White is a very nice stone capable of some amazing work, I figured the GS would work faster and would compliment the 4k stone better. My intuition wasn’t wrong as I ended up with a perfect clear mirror and an edge that could push cut magazine paper an inch away from the holding point.

After this I refined the edge further with CBN, boron carbide and diamond sprays. I’m pretty sure refining it with something like CrO is an exercise in futility.

I think my final edge is more than decent. I could have done better at the 1k – 4k gap, but overall, I’m pleased with my result. The fact that this steel held up to EVERYTHING I threw at it is impressive on it’s own. It polishes well, It is so abrasive resistant, that I wouldn’t even dare to reprofile it without diamonds and the final edge passed the HHT4. I think there’s not much more you can ask for in a knife steel. 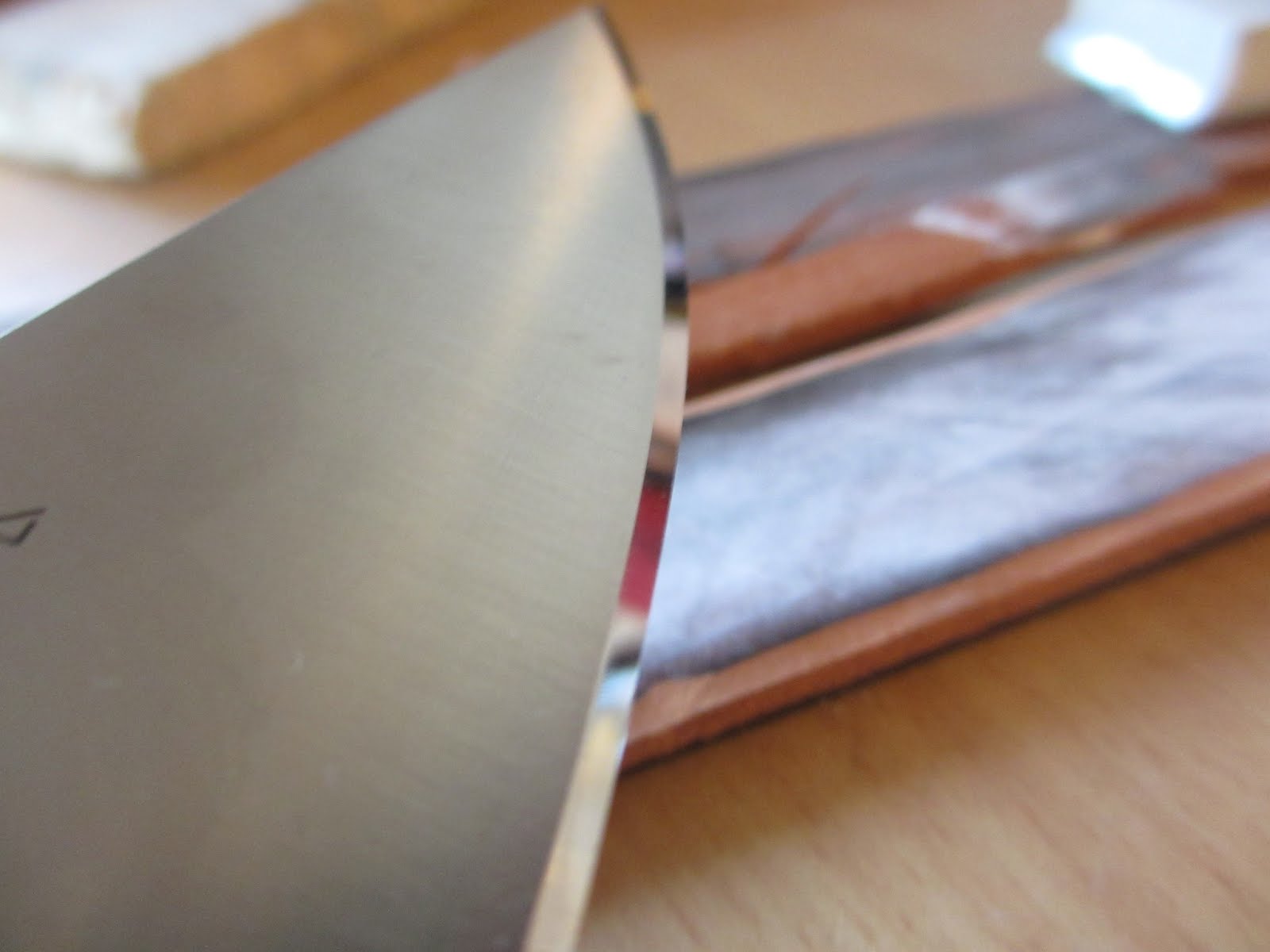 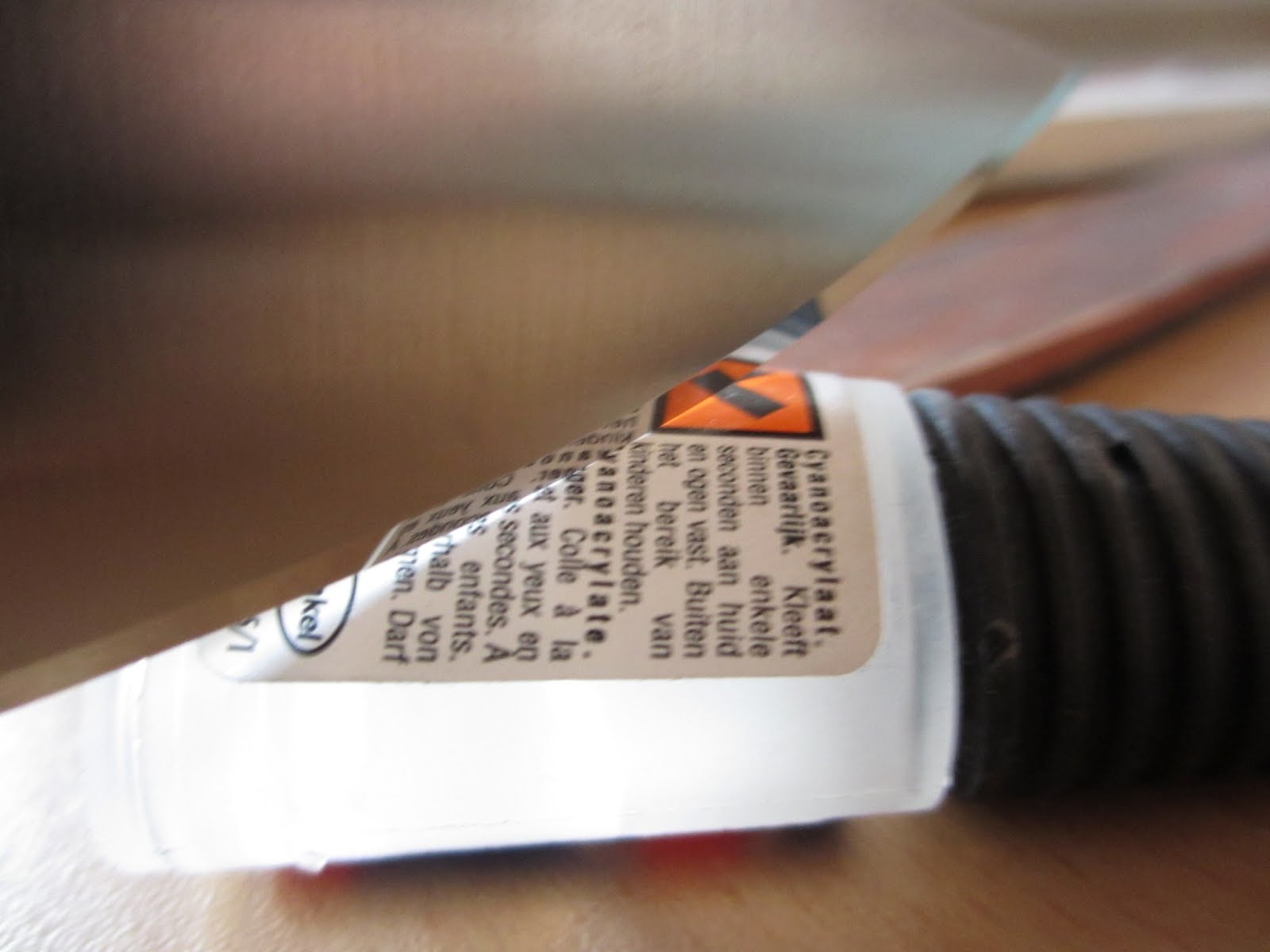 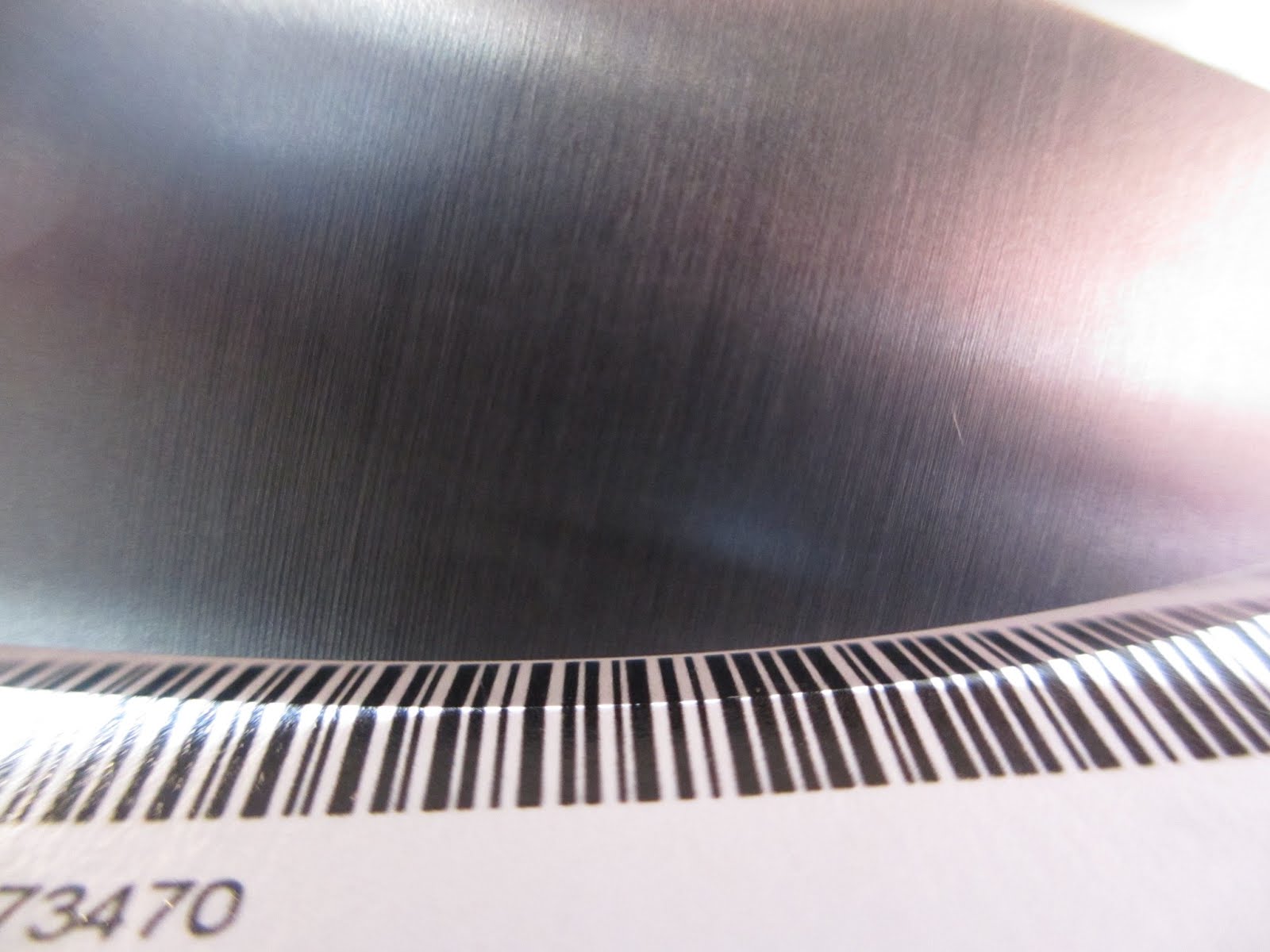